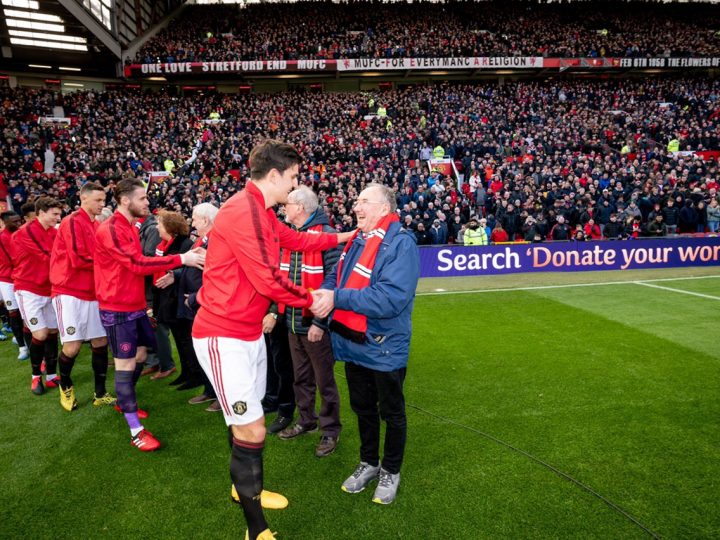 Last weekend, we helped Cadbury and Manchester United surprise fans with an unexpected substitute.  We swapped the customary pre-match child mascots for pensioners. All to raise awareness of loneliness among Britain’s older generation.

As part of Cadbury’s ‘donate your words’ campaign in support of Age UK, eleven ‘Guests of Honour’ were invited onto the iconic Old Trafford pitch to shake hands with Manchester United’s first team ahead of their match against Watford.

The Guests of Honour were all locals aged 61-87 and are dedicated Manchester United fans who have benefitted from their local Age UK charity, which helps tackle issues such as loneliness. The touching moment, which saw the guests step out in front of a crowd of 75,000 fans, served as a reminder of the issue of loneliness which affects thousands of older people.

Recent research revealed that in a typical week, almost 2.6 million people aged 65 and over speak to three or fewer people they know, with more than 225,000 often going a week without speaking to anyone at all. The campaign aims to inspire people to ‘donate your words’  by having a conversation with them.

“We’re proud to announce this partnership with Manchester United and to continue supporting Age UK with our ‘donate your words’ campaign.  Loneliness is such a huge problem amongst the older generation, and we are encouraging Manchester United fans and the nation at large to engage with this cause by donating their words at every opportunity to lonely older people in their communities. We are also excited to be working with Manchester United in the future on further collaborations. – Colin O’Toole, Associate Marketing Director at Cadbury.

Our campaign scored big with media and broadcast coverage across nationals and a slew of broadcast. Highlights include a place on the BBC Breakfast sofa and Sky News, Radio 5 Live, plus the Guardian, BBC News, the Mirror, Mail Online and much more.