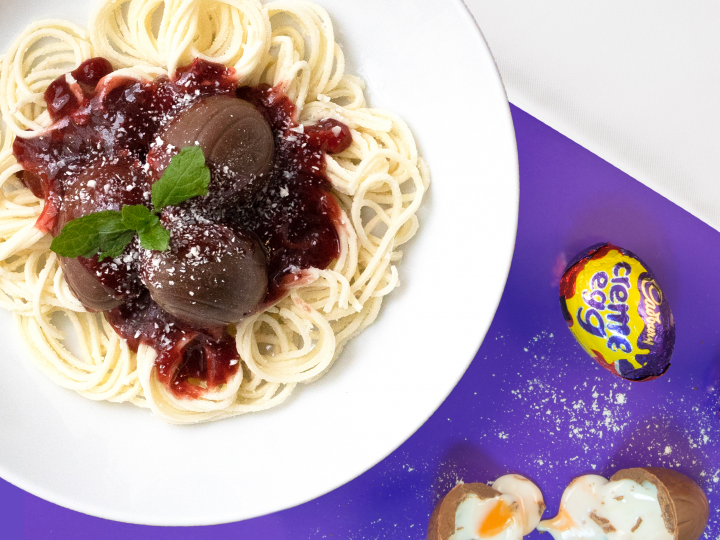 We hosted a non-stop 24 hour Creme Egg feast that gave the public a chance to star in a super-sized take on the ‘social eating’ challenge and share their unique ways of eating a Cadbury Creme egg. Our EAT-ers were able to try the weird and wonderful creme egg creations live on camera: from Creme Egg Curry, to Creme Egg Spaghetti and Meatballs, to Scotch Creme Eggs.

Visitors  also had the opportunity to appear in their own Creme Egg movie and take part in the live broadcast on Facebook and on-screen in London’s Leicester Square, while the most EATertaining stars won prizes for  ‘most romantic devour’ to the ‘best action-packed chow’.

Cadbury Creme Egg fanatic, Ian Wright, kicked off the 24 hour live stream, plus, the cel-egg-brity line-up also included Maya Jama who was spotted at the event too.

Our campaign had 320M REACH as we secured 53 pieces of coverage and over 70 pieces of social coverage from our influencers and attendees. Press highlights included The Mirror, The Sun, Express Online, Time Out, Daily Star Online and Buzzfeed.

Raphael Capitani, Brand Manager, Cadbury Creme Egg, said: “We were truly thrilled to reveal this ‘egg-citing’ EATertainment platform, turning the Cadbury Creme Egg eating experience into entertainment. Through this launch and our real-life feast, we’re offering people the chance to be the star and show the world their own and ‘egg-centric’ ways of eating a Cadbury Creme Egg.”