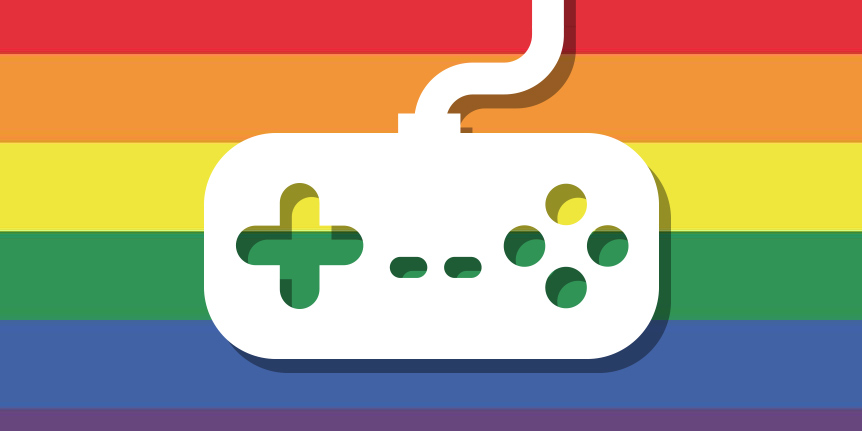 In 1991, the fourth installment in a series of funny and successful sci-fi adventure video games launched called Space Quest IV. In the game, there’s a scene in which the main character, Roger Wilco, needs to use an ATM card he finds on the ground. The card once belonged to a woman, and, unfortunately for Roger, the ATM uses facial-recognition technology, meaning Roger needs a disguise to access it.

He (and you, as the player), heads to an intergalactic department store to buy a dress, wig and high-heeled shoes, determined to trick the ATM. When Roger goes to the counter to purchase his new outfit, the robotic clerk looks him up and down and, in a completely condescending tone, says:

When I played this, I was 15 years old and loved video games. I knew I was gay but wasn’t out of the closet yet. This one word in this one random video game struck me. Was it “sick” to dress like a woman or diverge from gender norms? Was something wrong with me for being gay?

It was intended to be a throwaway line, but it struck me as completely inappropriate. Thousands and thousands of kids were playing this game – some that were probably gay like me – and this was a cruel joke with real repercussions.

This same sentiment popped up in other video games of the time. FINAL FANTASY VII, one of the most popular video games of all time, is one of the worst culprits, presenting an extended sequence with the main character dressing up as a woman that is also played for laughs.

The video game industry had a major problem with how it portrayed women and minorities – in particular the LGBTQ+ community. At best, publishers and developers weren’t thinking about the different types of people playing their games or, at worst, they just didn’t care.

It took a very long time – and many years of protests and speaking out – but, luckily, the video game industry has taken major positive steps forward in accurately and respectfully representing the LGBTQ+ community.

In recent years, video games have embraced all types of players – not just the cis white males that dominated the industry for decades. Gone are the days of only being able to play as a white male character with dark hair and stubble. Now, you can play blockbuster games starring women and people of color. Most games even let you customize your character, letting you play as whomever you want – even a man that wears a dress – with no one in or out of the game laughing at your choices.

Video games now feature same-sex marriage options on a regular basis. This was unheard of 10 years ago.

Even outside video games, the same companies making these games more diverse are sponsoring or marching in Pride parades.

The industry is changing – and fast.

And it’s thanks to members of the LGBTQ+ community and its allies for standing up and demanding more representation in a medium they love.

As a lifelong video game fan and a gay man, it’s wonderful to see. I can only imagine the young gamers out there that aren’t out of the closet yet playing this new generation of video games. They can now see and play as themselves in these massive pieces of mainstream entertainment.

Happy Pride, everyone! Let’s all embrace this brave new world – both real and virtual.