I married a man with eight sisters and brothers. Through my marital union, my notion of “family” as an only child quickly took on a new meaning. Overnight, I gained eight new siblings – two of those siblings, part of the LGBTQIA community.

Most of my blended family is male-dominated, but there has never been any visible way to decipher which man in the family is Gay. It’s important to remember that many diversity traits lay hidden under the iceberg. We all have as many similarities as differences that make each one of us unique, valued humans – moving through the circles that shape our identities.

My brother-in-law, Elliott, “came out” over 25 years ago, but I recently interviewed him to better understand his journey as a Gay Black man and discuss the true meaning of allyship. The very contemplation of co-writing this article churned up truths and things unspoken depending on which circle we discussed unpacking, but our hope is that the dialogue can help others struggling in this space — whether they are a Gay individual or an ally, both being part of the LGBTQIA community.

The following is an interview between Golin’s Natasha O’Dell Archer and her brother-in-law, Elliott Archer:

Natasha: Where did the story of Elliott discovering his non-heteronormative identity begin?

Elliott: I was a vibrant, energetic child. I sucked up a lot of energy in the room. As an adolescent, when I started developing an awareness about my sexual identity, I was bullied at school. People called me “Gay” before I’d processed that part of myself. At the same time, I was misunderstood at home and not comfortable talking about the bullying because it centered around kids figuring out that I was “different.”

Even more, you add on the spiritual circle I was navigating – the Black church. Many African American men who have been raised in religious environments are thrown into spaces that are disproportionately hostile to the LGBTQIA community. For example, the pastor would say Gay people (like me) were an abomination.

What do you do when you are told you don’t have a place in the church?

The spiritual safe-haven so central to promoting hope in Black communities was not a safe-haven for me, and in fact it became a place that evoked fear and shame. So as a Gay Black man, where could I go to gain balance and find connection? How could I cultivate my own well-being when simply being myself wasn’t safe? For so many Gay Black men, there is nowhere to go, which is why the suicide rates are so devastatingly high in our community.

Natasha: That was really difficult, to be put in a fight or flight scenario on a daily basis. Where did you go to find your own release?

Elliott: Let’s be very clear, I have always felt deeply loved and cared for, but sometimes that love felt like it came with caveats, even from those I was most comfortable with. They knew every part of my being except the part of me that was a member of the LGBTQIA community.

I knew the pain that came with being seen, so I taught myself how to NOT be seen. That was safe. That was how I avoided shame, anxiety and fear.

Natasha: What saddens me the most was in the process of all of that, you missed out on enjoying some of your own life experiences. I have observed you for years in certain settings, and felt as though you were with us physically, yet not “actually with us.”

Elliott: Yes. But, when I went to college, I was not closeted at all. I was in the Gay Men’s Choir and participated in the LGBTQ Association on campus. I was out and living my life. I just felt it was easier to cope in other circles by being invisible.

Natasha: Those are tough memories to keep. Talk to me about how you found your resilience. What led you to push through some of that fear and move past your own protective shields?

Elliott: Music became my safe space. From my earliest encounters in grade school, music, especially classical, became the affirming medium that allowed me to connect with my higher power. As an applied voice instructor mentoring college students, my experiences have had a profound impact on my teaching and a desire to provide that same space for others. I came to understand that my acceptance of my own identity was grounded in a space that I created and nurtured by allies around me.

Take our relationship for example. You took me aside and told me that as your new brother, I would always be welcomed in your home as my whole self. You encouraged me to bring my partner over for dinner and explained that your home was a house filled with love for me and every aspect of my being – especially my inclusion in the Gay community. It meant everything to me and so much more than I think you even realized.

Elliott: Allyship is absolutely about those small gestures – building trust by letting someone know you see them and value them. If a workplace is built to be an engaging, empathetic environment, those counter-spaces are explicitly affirming.

Natasha: Yessssssss. In the land of DE&I, we call that form of allyship “micro-affirmations,” and I often coach folks to unpack the notion that lifting someone up from a marginalized community must be a larger-than-life act to actually “count.” Allyship is a life-long endeavor. One must learn to adopt the endeavor as a natural and daily way of living.

Ten years ago, when I gained a husband, I also gained a forever friend and brother in Elliott. Learning from his story has allowed me to more deeply understand the need for creating counter-spaces and counter-opportunities for those in the LGBTQIA community. Allyship is one of the most powerful tools in our toolbox that will help to achieve the transformation of the human condition we yearn for in our present day fight for social justice, and “love is love.” 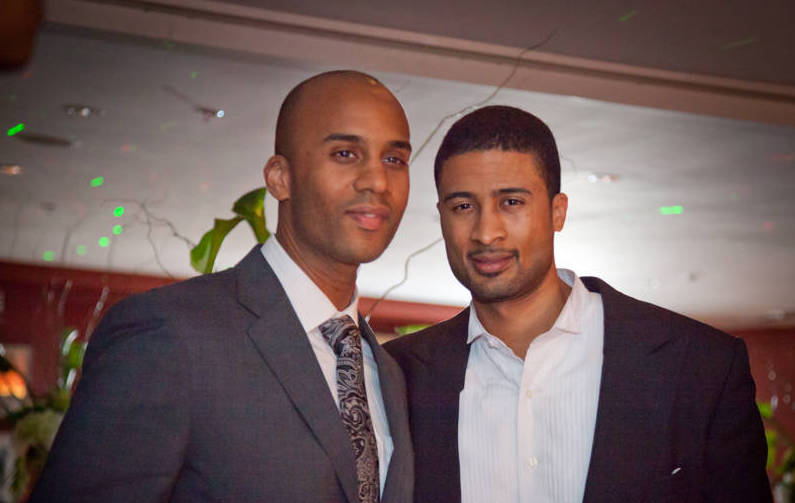